The Rhodope is a mountain range which delights all senses with it’s crystal clean air, untouched areas of beauty, and incredible natural phenomenons formed thousands of years ago.

Famous for their magical villages and diverse and unspoiled nature, the Rhodope Mountains have kept the core values of the Bulgarian spirit throughout the centuries. It is a must-see for nature lovers!

This area known as the Kingdom of Orpheus offers some fantastic riding in the picturesque Bulgarian countryside. Enjoy long canters across open fields and vast meadows and ride through the famous vineyards of the Thracian Valley.

You will ride in all paces each day and there are plenty of opportunities for some long canters.

This trail is suitable for riders from confident intermediate riders upwards. All participants should be in control at all paces out in the open and over varied terrain. You will be spending between 4-6 hours in the saddle each day so a good level of current riding fitness is required. The weight limit is 90kg.

Departure dates are confirmed for 3 riders. The maximum number of riders in a group is 8.

The horses are the pride and joy of our partners in Bulgaria. They are much loved and well looked after. Their horses are Trakehners, Shagya Arabs and Eastern Bulgarian horses, ranging from 14.3hh to 16.1hh. They are responsive, willing and surefooted on difficult terrain.

The tack used on this trail is English style, mostly made by Wintec, and in good condition. 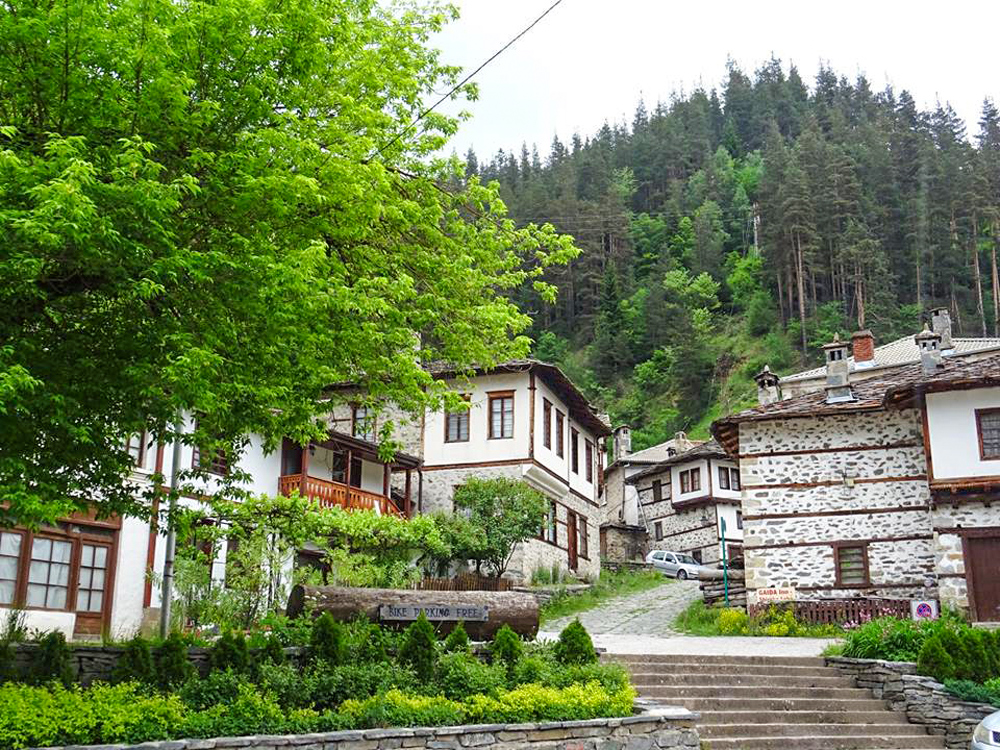 The accommodation during the trail is in comfortable hotels and guesthouses. Some hotels will have access to a swimming pool, sauna and spa treatments with healing, warm mineral water. All spa treatments are at additional cost and payable locally.

During the trail riders can enjoy the fresh, local cuisine. Breakfasts and dinners are served in overnight accommodations and lunches are on route picnics or alternatively a packed lunch carried in your saddle bags.

Get a free Rhodope Mountains Trail mini-brochure in PDF format. 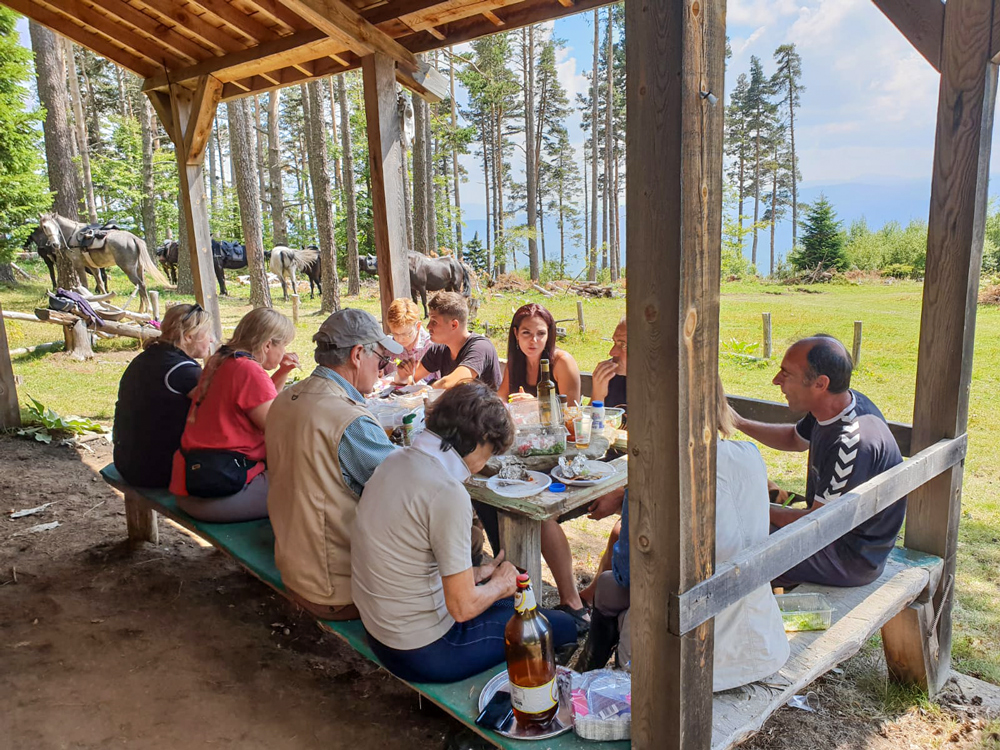 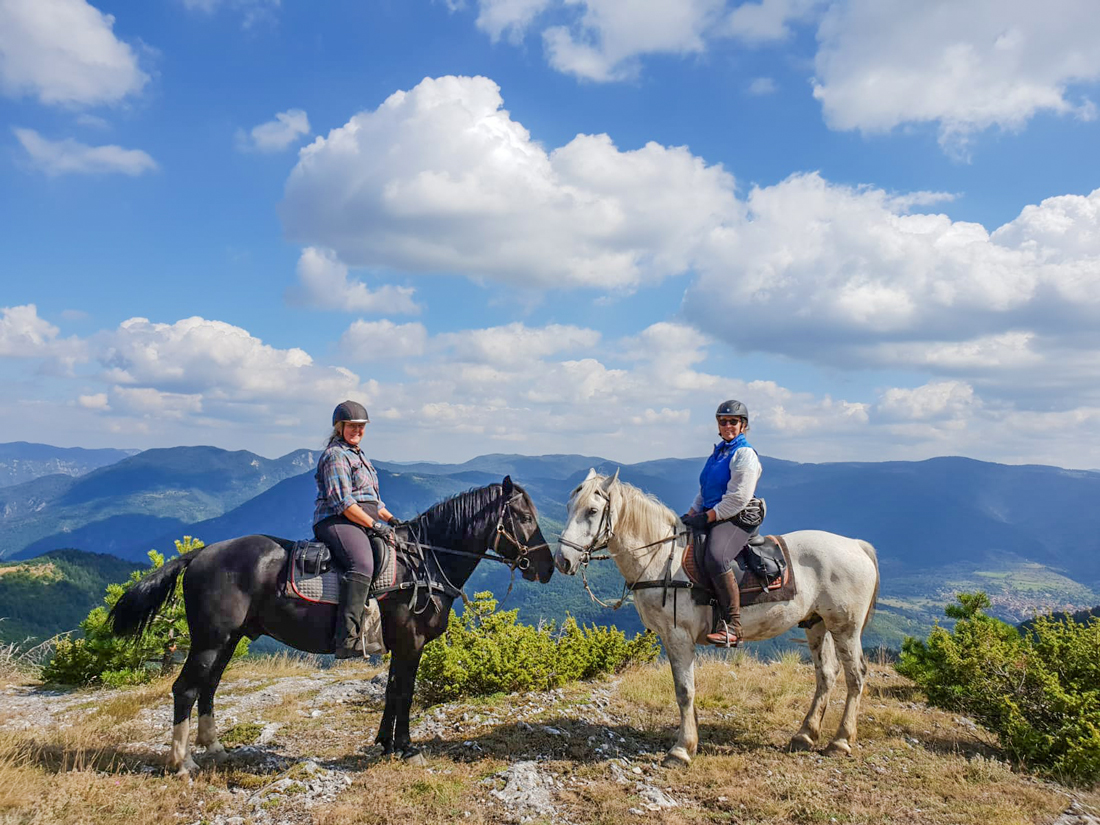 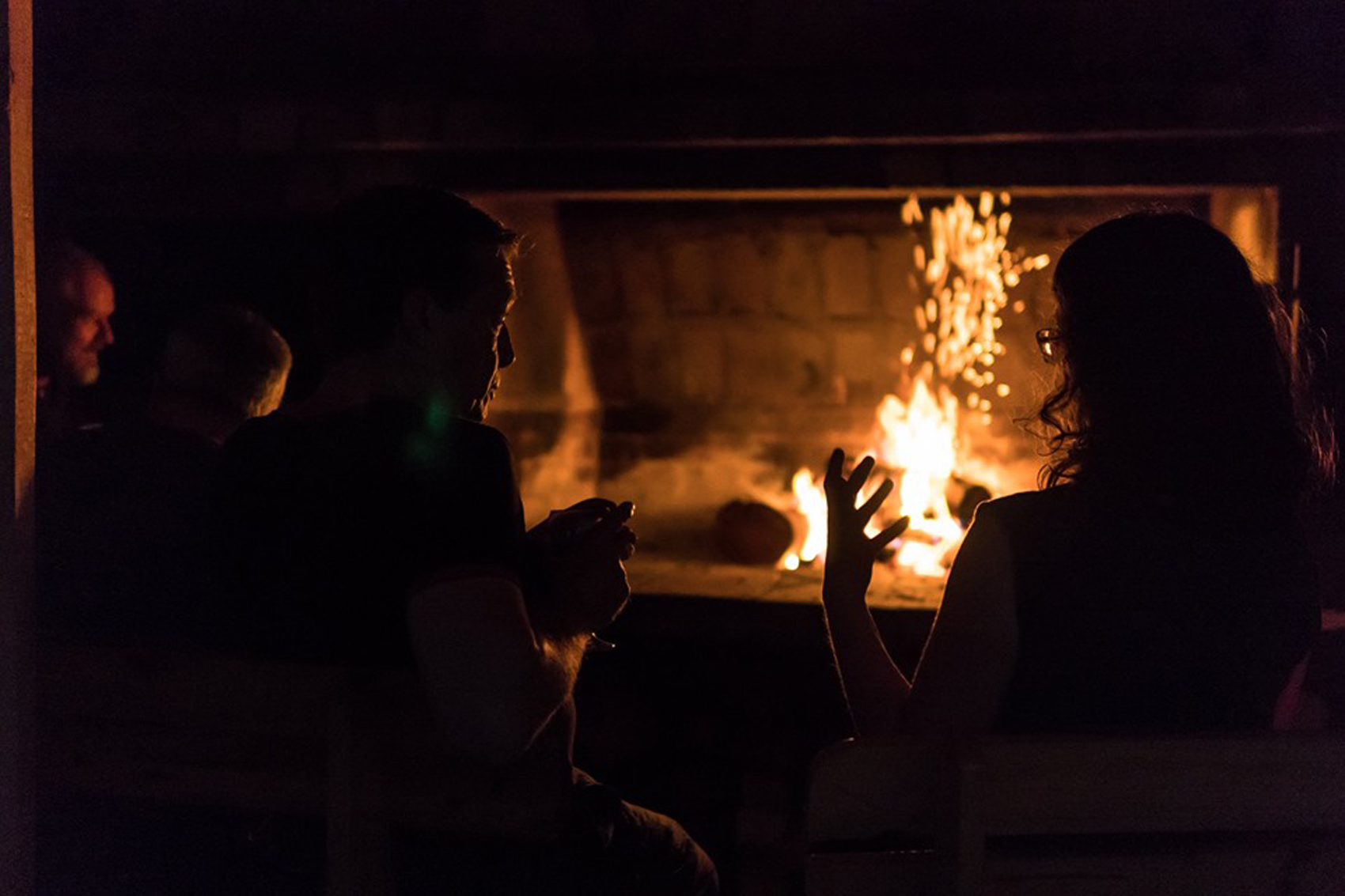 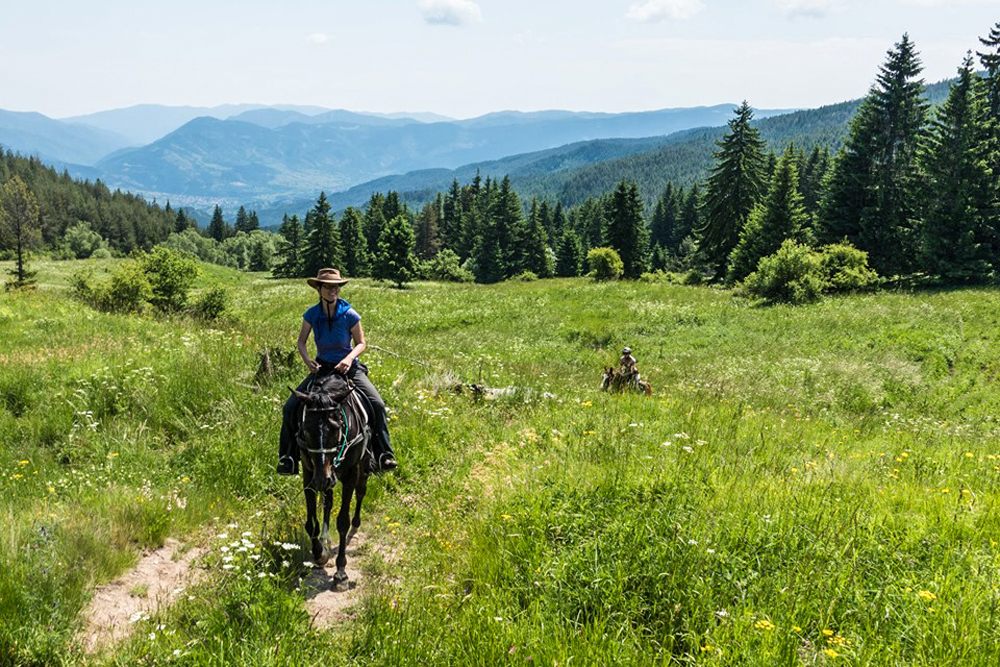 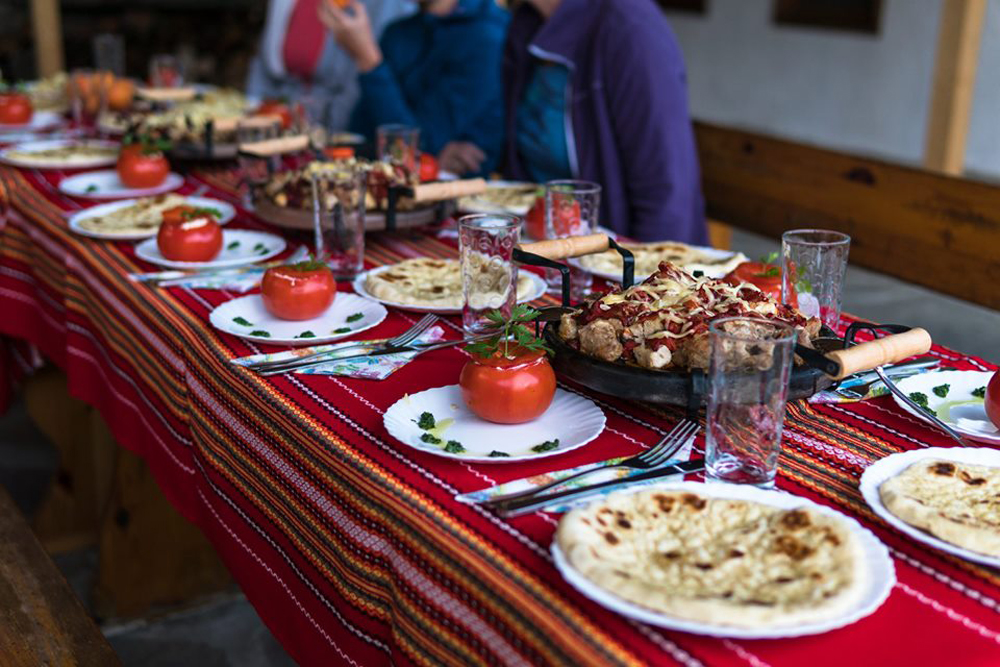 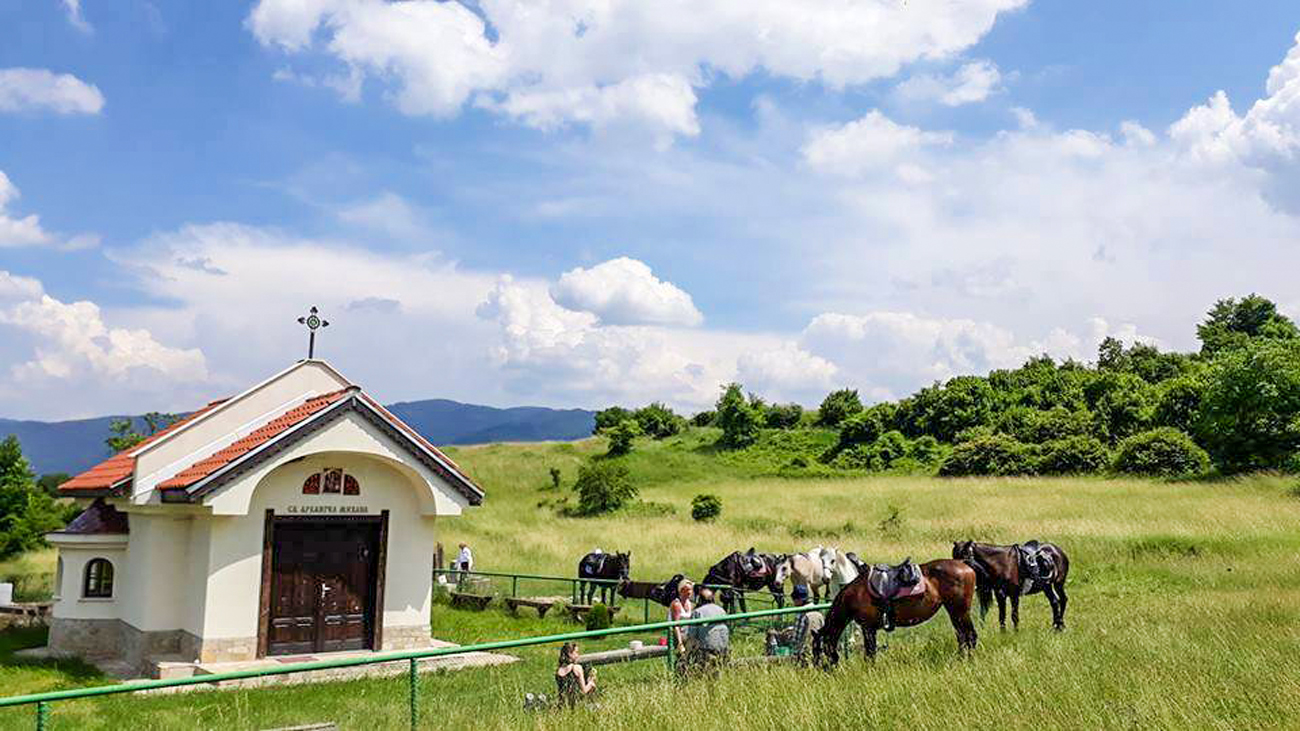 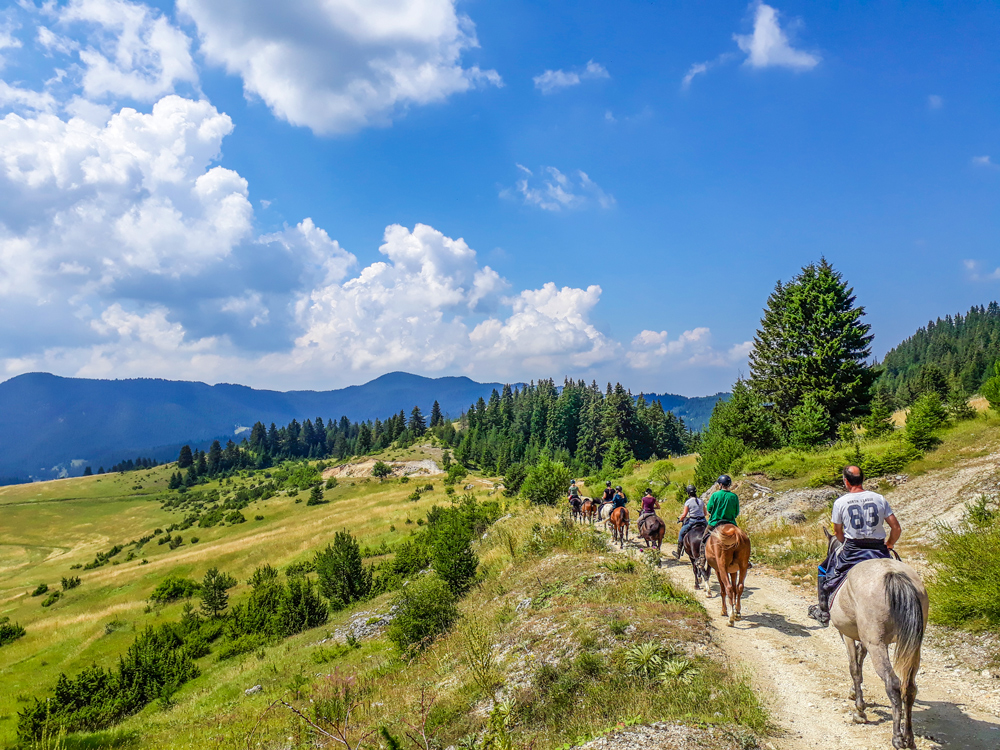 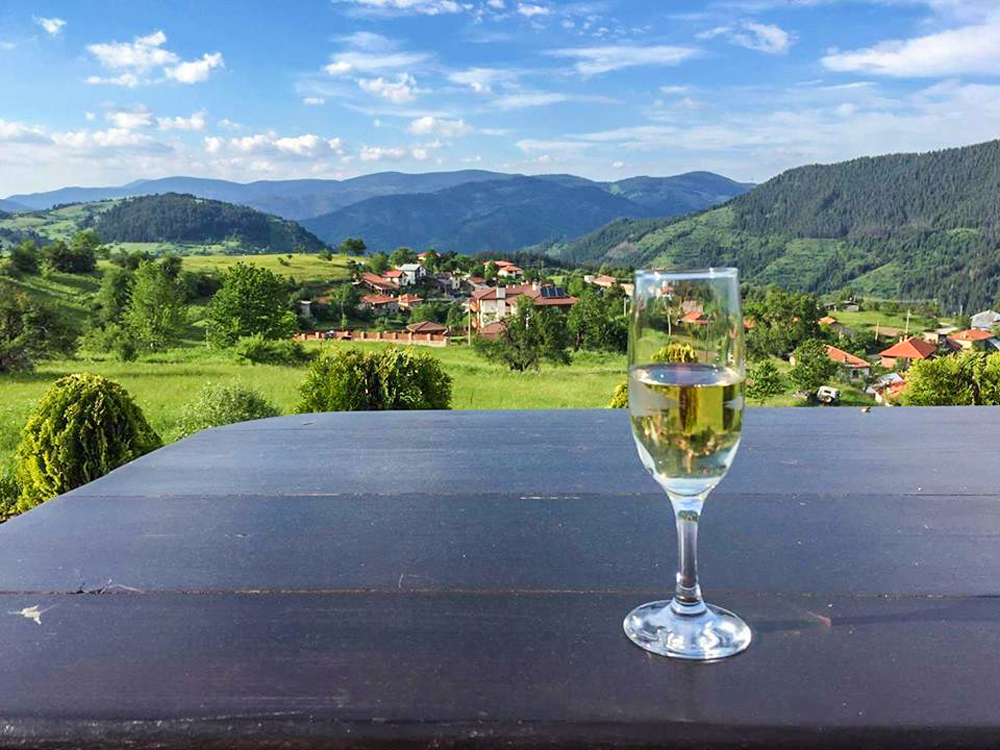 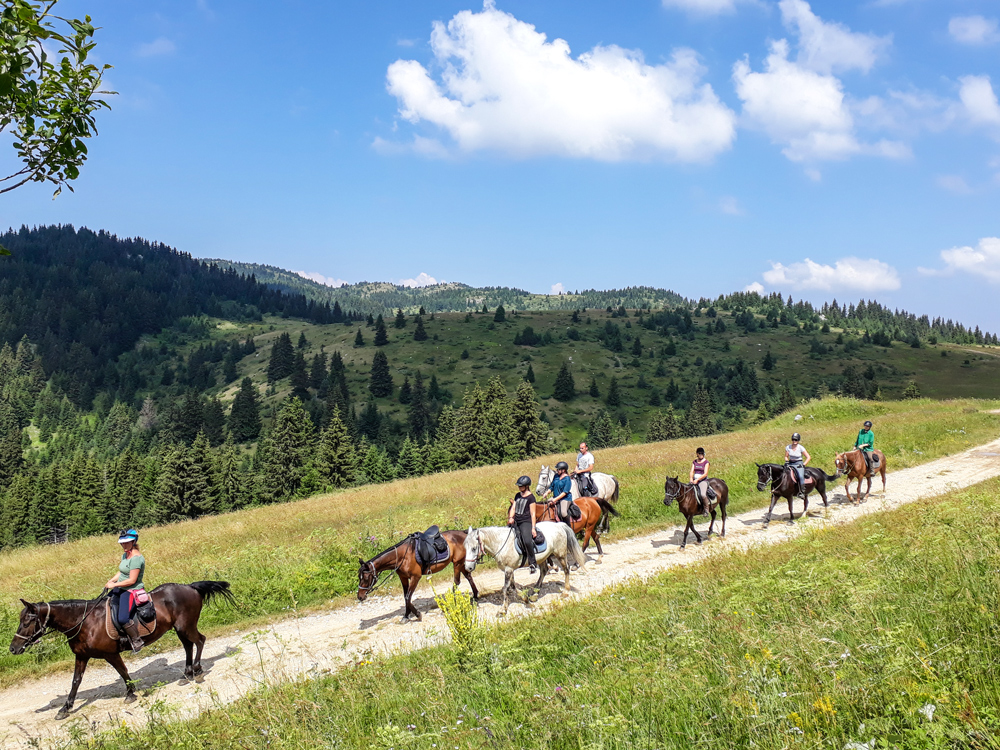 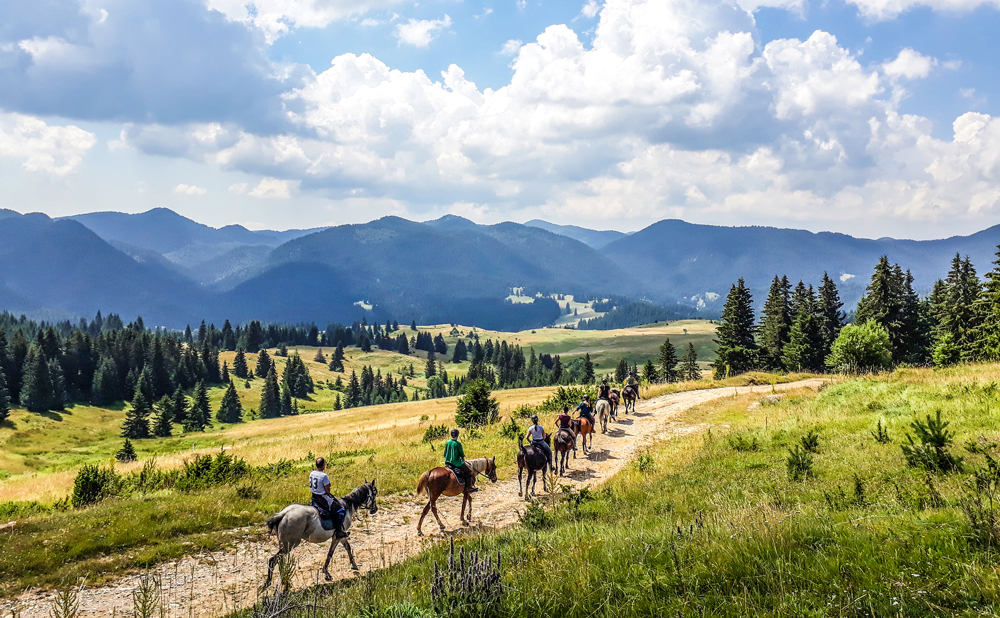 Day 1 Arrival and transfer from Sofia airport to Plovdiv, considered to be the cultural capital of Bulgaria. The city has a diverse history and features many remains of a civilisation much older than that of the Romans - a city more than 8000 years old and a contemporary of ancient Troy. In the afternoon you will visit the old town of Plovdiv, including the Ethnographic Museum and the Antique theatre, which is one of the best preserved in the world. Accommodation at the biggest show jumping stable in southern Bulgaria.
Day 2 After breakfast you will be transferred to the stables, the starting point of the trail, in the 'Sredne Livadi' protected area. Today’s destination is a village known for it’s majestical beauty, situated in a famous and picturesque valley.
Day 3 After another traditional Rhodopean breakfast, the journey continues in the footsteps of Captain Petko Voyvoda (a famous historical figure) towards Hvovyna Village (altitude of 750m). The riding today will take you by a number of chapels with panoramic views while crossing one of the most beautiful valleys of the Central Rhodopes, namely "Hvoynenska". You will have a picnic lunch near one of the chapels with the chance to sit by the fire and have some wine. You will also visit the second largest and oldest Ortodoxal Monastery in Bulgaria called "Bachkovo Monastery". You will spend the night in a family owned and operated hotel. Total length: 5 Hours Riding
Day 4 Today's trail will take you to the Village of Orehovo, which is around 500 years old. From here starts the longest eco-trail in Bulgaria ending near the Aegean Sea in Orehovo, one of the best starting points for tours in the Rhodopes. You will come across some stunning views of the "Sredni Livadi" protected area. The ride will take you past an old Roman road and ancient 18th century chapel called Saint Atanas where you will have a simple packed lunch carried in your saddlebag. You will also visit the "Skakaloto" waterfall and the "Kosten kamyk" cave. You will stay tonight in a family run hotel. Total length: 3-4 Hours Riding
Day 5 After another traditional breakfast, you will head for the village of Zabyrdo. This is a small mountain village standing 1400m above sea level. It is famous for making the traditional Rhodope cheese. It is also one of the oldest villages in the area, around 800 years old. You will also visit the rock phenomena "Wonderful Bridges" on horseback. This is one of the five most visited destinations in the Rhodopes. Lunch is eaten in a restaurant overlooking the 'Wonderful Bridges'. Tonight you will sleep in a family run guesthouse. Total length: 6 Hours Riding
Day 6 Today you head back towards Orehovo village following another route. You will climb the second highest peak in the Rhodopes (Mount Big Persek 2100m). This area will reveal a unique panoramic scenery, stretching across half of the Rhodope mountain. You will have carried your packed lunch in the saddlebag and will eat in an old shelter beside the best-preserved Roman road of the Rhodopes. Tonight you sleep back in the same guest-house you slept in before in this region. Total length: 6 Hours Riding
Day 7 This is the last riding day and will take you back to the starting point of this trail of a lifetime. You will have ridden over 150km by horseback, passing by one of the oldest Thracian fortress called "Shtut grad" which dates back to 5th century BC. The two hills of the forests, the Sun Hill and the Moon Hill held great power for the Thracian tribe called "Best". They were known through the Roman empire as the most fearless Thracians. Lunch today is in a restaurant beside the fortress. Overnight back in 5* hotel with spa facilities and olympic size swimming pool. Total length: 5 Hours Riding
Day 8 After breakfast it is time to say farewell before being transferred back to Sofia airport for your departure. Transfer time is approximately 3 hours.

Riders can fly into Sofia or Plovdiv. The trail starts in Plovdiv but most guests fly to Sofia as there are a lot of flights into and out of the capital city.

Transfers are included from the two airports at set times. You should ideally arrive into Sofia no later than 16:00, in order to allow time for sightseeing in Plovdiv. On departure day your flight should not leave Sofia before 12:00.

If you are coming into Plovdiv instead then please contact us for timings.

Payment & Cancellation Terms
Holidays are confirmed with a 20% non-refundable deposit. The full balance is due 56 days before the start date.

Insurance
All saddletravel.com customers are required to take out appropriate travel insurance that covers horse riding and holiday cancellation. Proof of insurance details will be required during the booking process.

“I am confident and in control at trot and canter out in the open and over uneven ground. I’m able to mount and dismount unaided and have a good level of current riding fitness. I do not suffer from any illness or disability that could prejudice my safety or that of others.”