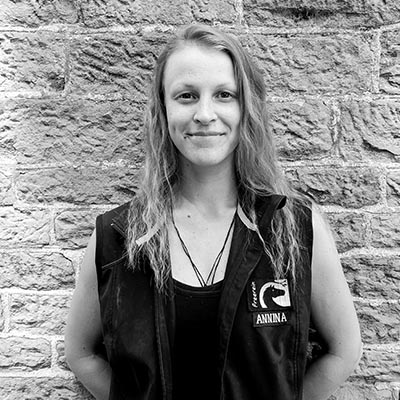 Contact ride expert Annina now on WhatsApp with any questions queries about this trail.

Experience this epic trail which crosses the greenest and wildest parts of Sicily, setting off from the eastern Madonie Mountains and crossing the wooded Nebrodi Mountains to arrive at Mount Etna, one of the world’s most active volcanoes.

This trail is suitable for intermediate and experienced riders. All participants should be confident and comfortable at all three paces riding over varied and rough terrain and they should have experience in hacking out in the open. Good level of fitness is required as there may be long trots and gallops along the way, riding between 6 and 8 hours each day.

You will be guided by Alex who is a true expert of Sicilian culture, history, biodiversity and natural wonders. He has guided trails through the island for more than ten years and will guide you safely through the most remote parts of Sicily.

Maximum number of riders in a group is 10.

Contact ride expert Annina now on WhatsApp with any questions queries about this trail.

The horses are Sicilian native breeds crossed with Arabs. All bred in Sicily. They live out all year round in a herd environment and are hardy and sure footed on the rough terrain. All horses are trained to be obedient, well-behaved, energetic and forward going.

The saddles used are light weight and English style with a sheepskin cover to add some extra comfort. Bridles are special trail riding bridles. Small saddlebags are provided for items such as water bottles, sun cream and extra layers.

Guests are not required to groom and tack up the horses. 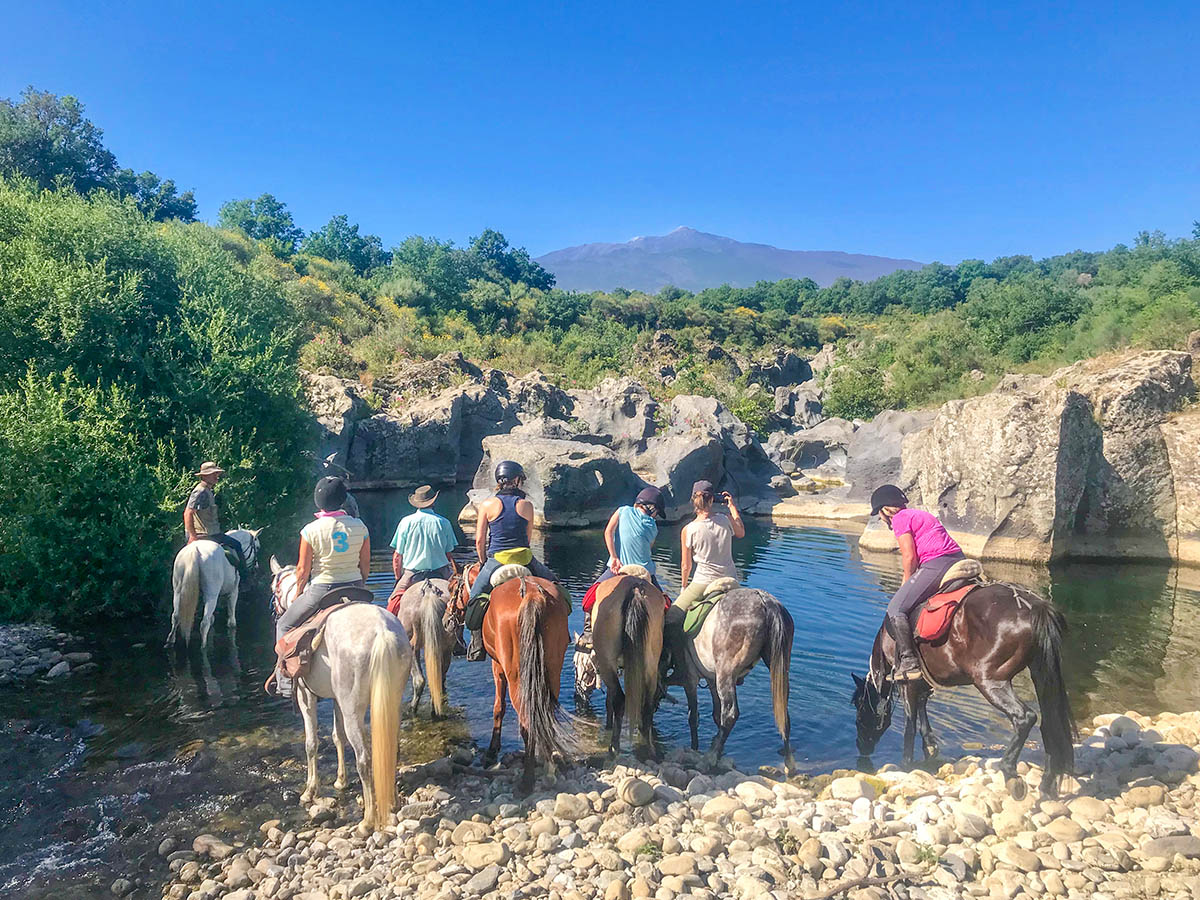 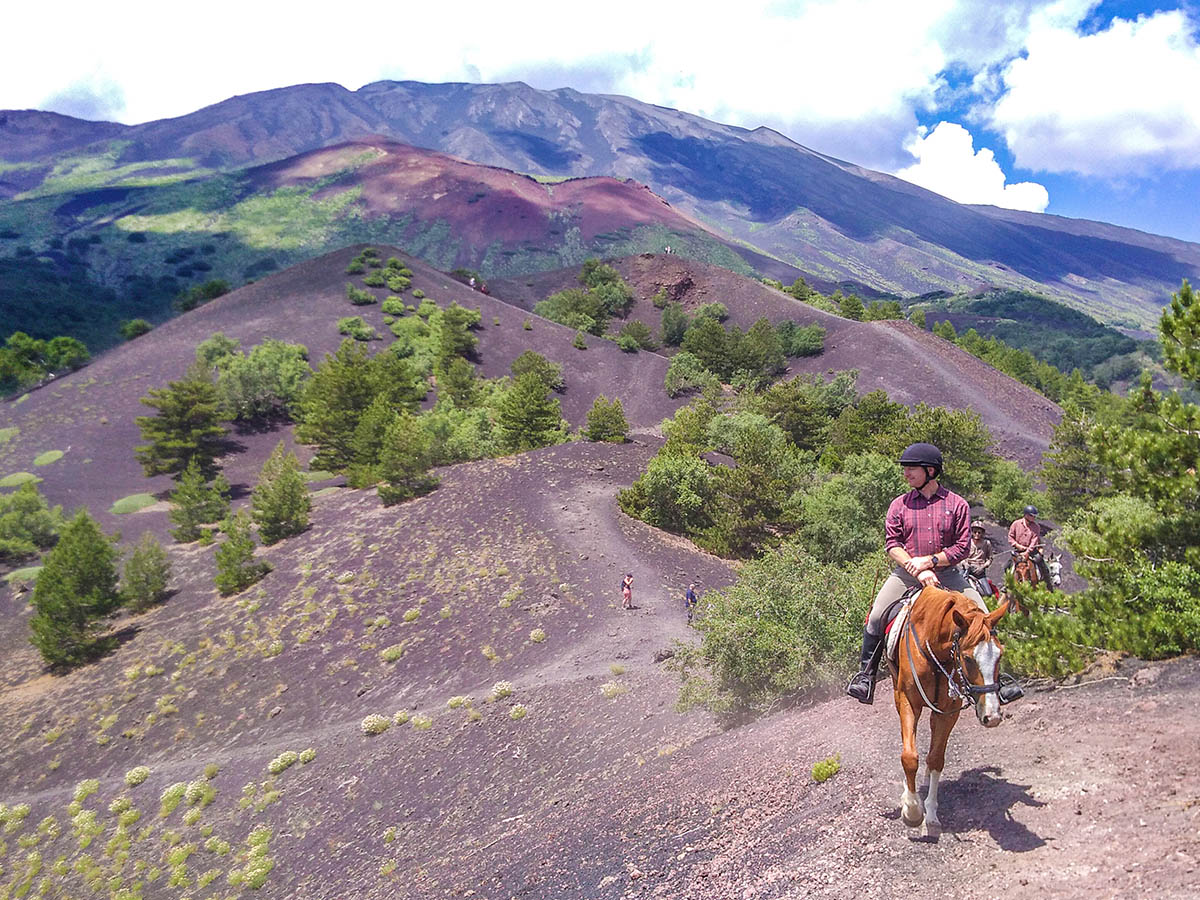 Accommodation during the trail will be in Agriturismi, B&B or good quality hotels.

All meals are included from dinner on the day of arrival to breakfast on the day of departure. Evening meals consist of authentic Sicilian cuisine prepared with local produce. A typical evening meal will include a variety of starters, a pasta course, a meat/main course, dessert, wine, water and a digestif. Picnic lunches are provided by support vehicle and include fresh bread, salads, cheeses, olives, charcuterie, Sicilian specialities, wine or other drinks on request, coffee or tea.

Special diets and allergies can be catered for with advance notice.

Luggage will be transferred by car between the overnight stops.

Get a free Wild Sicily – Madonie to Etna mini-brochure in PDF format. 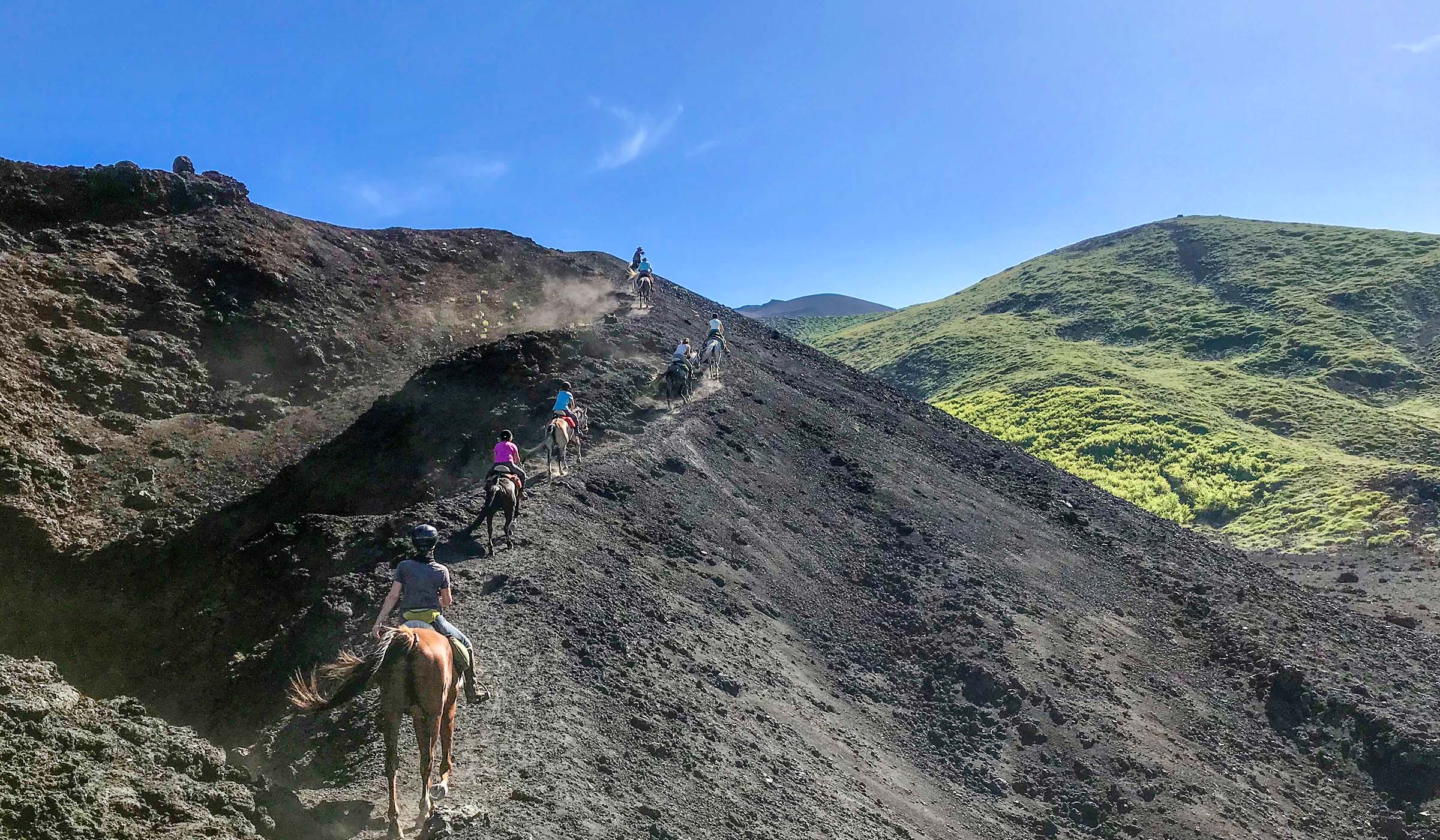 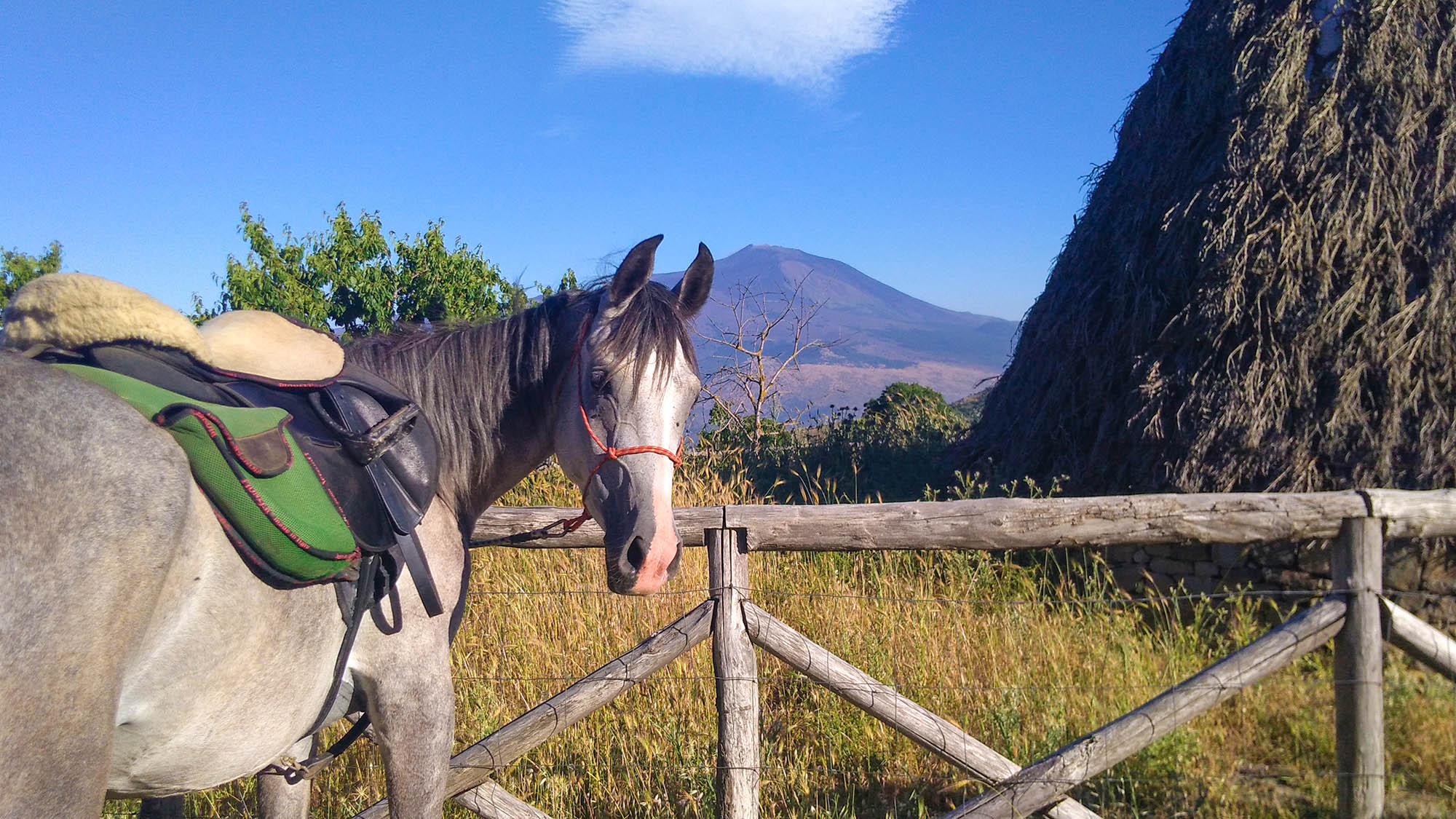 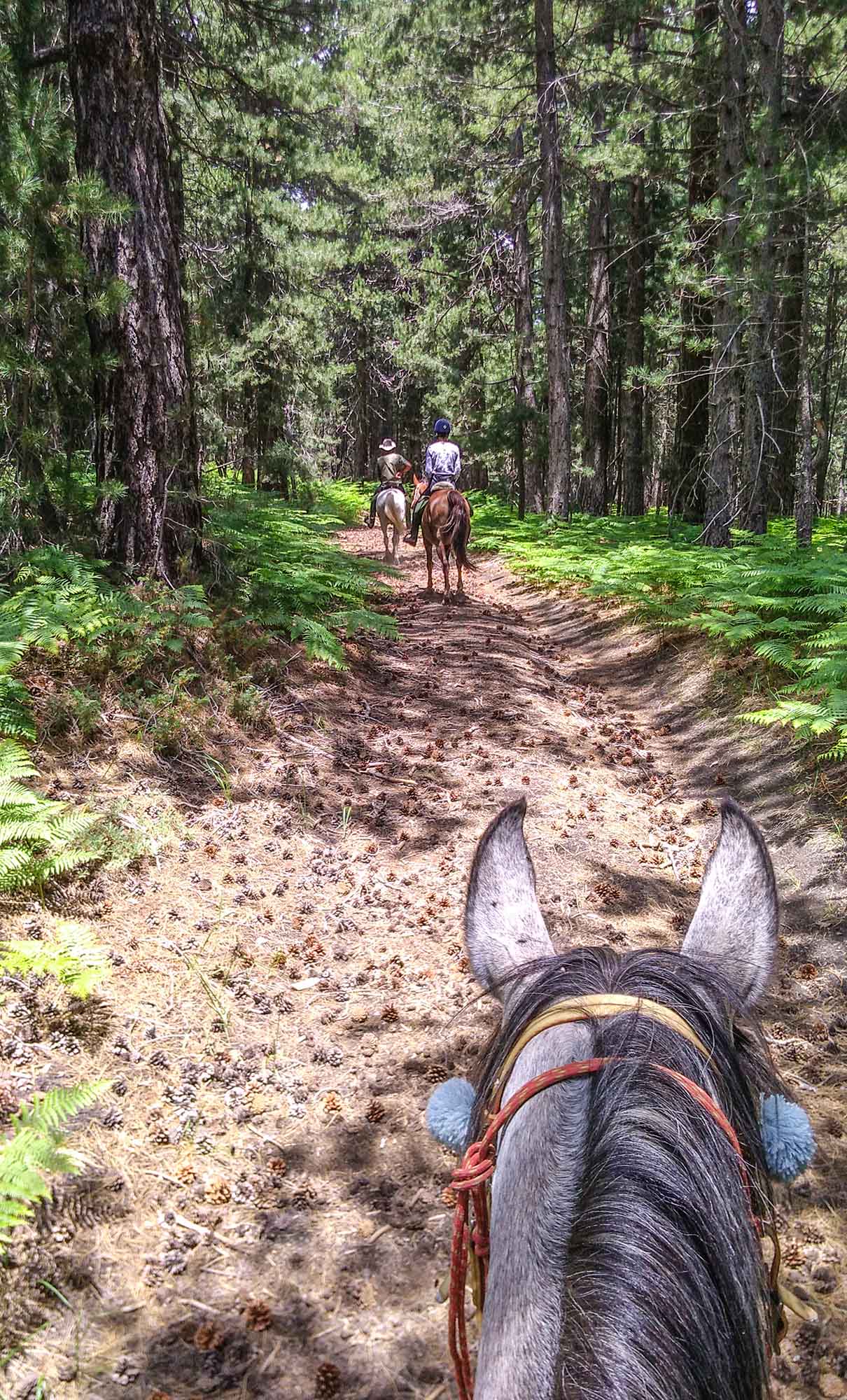 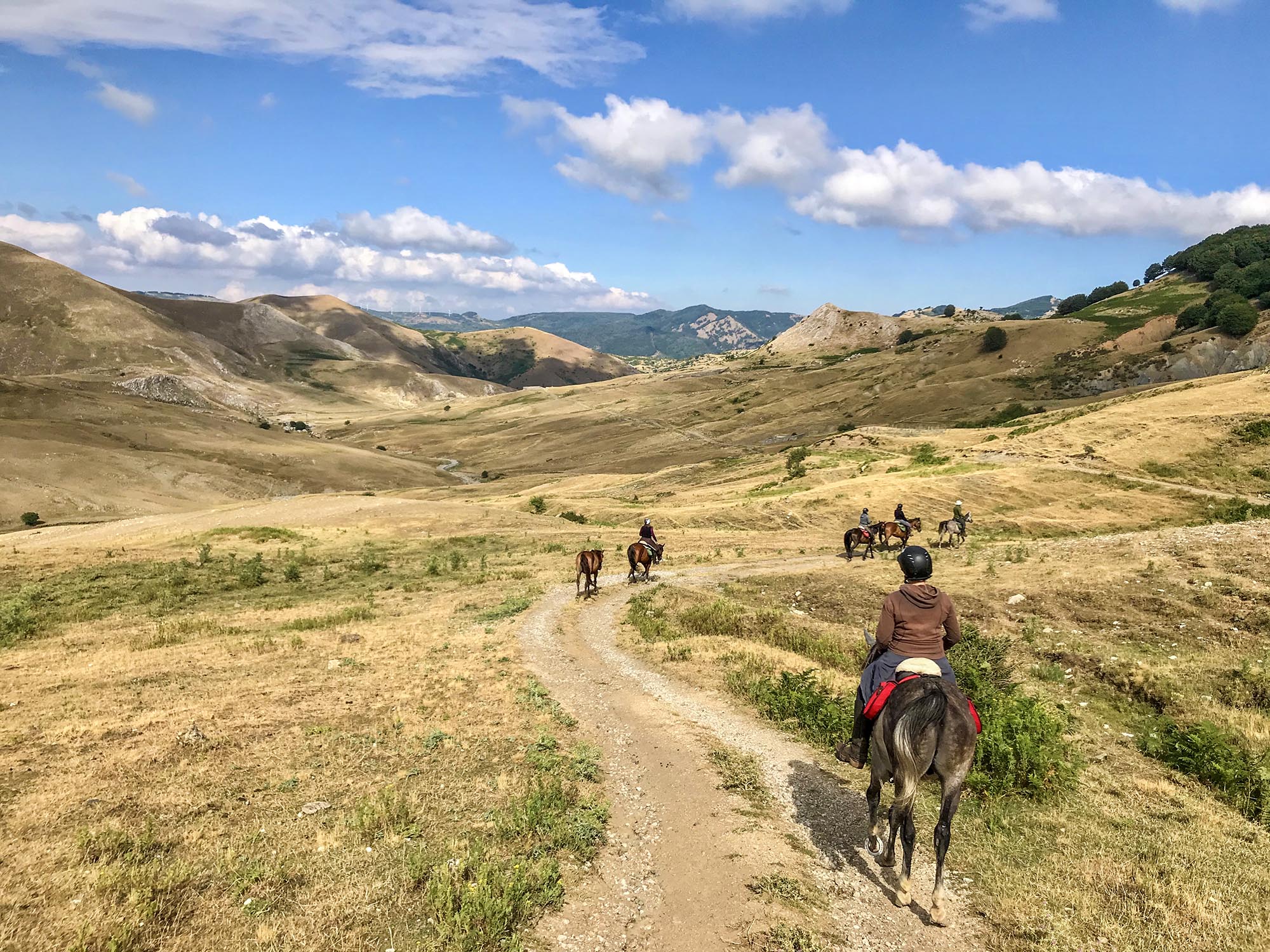 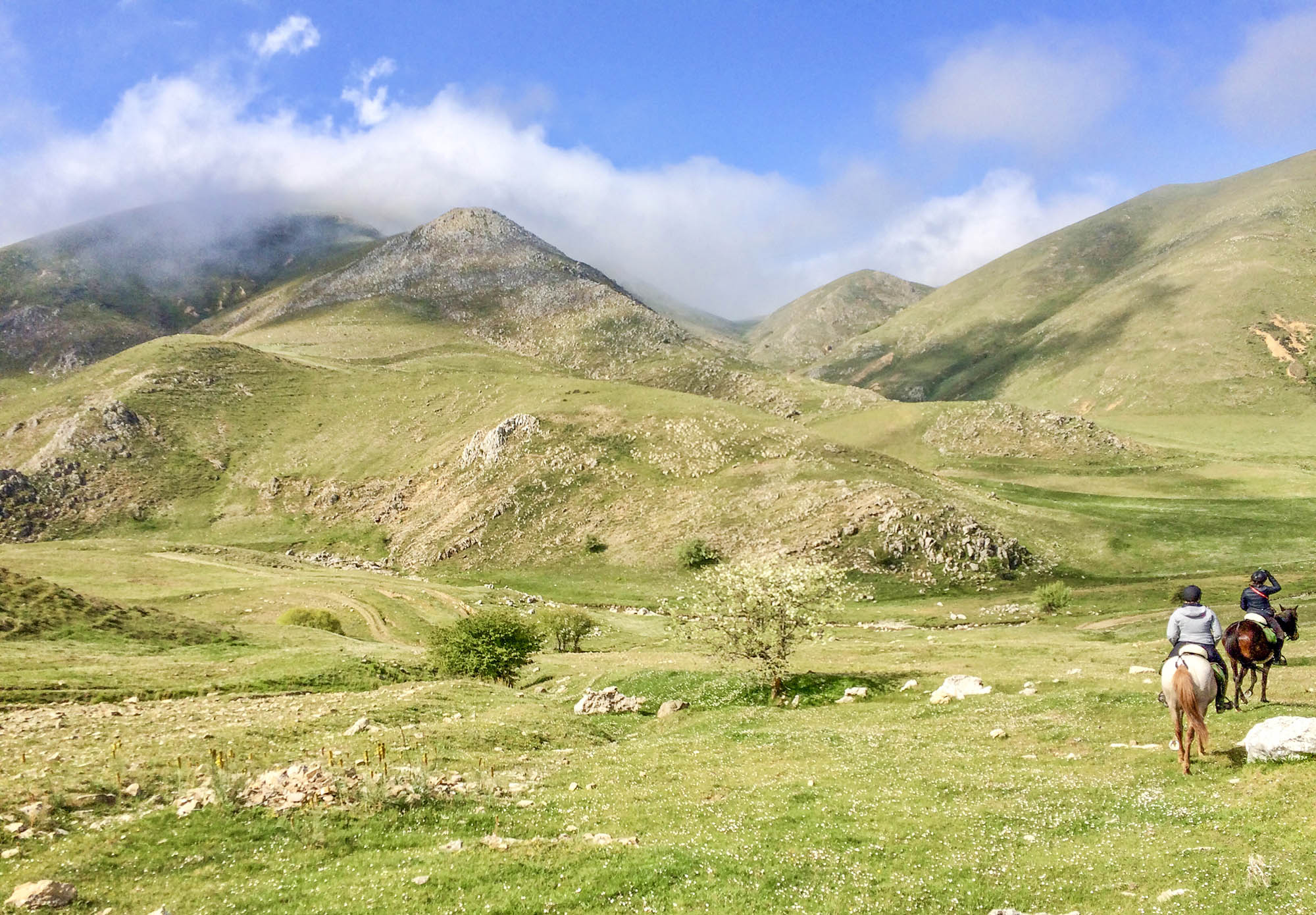 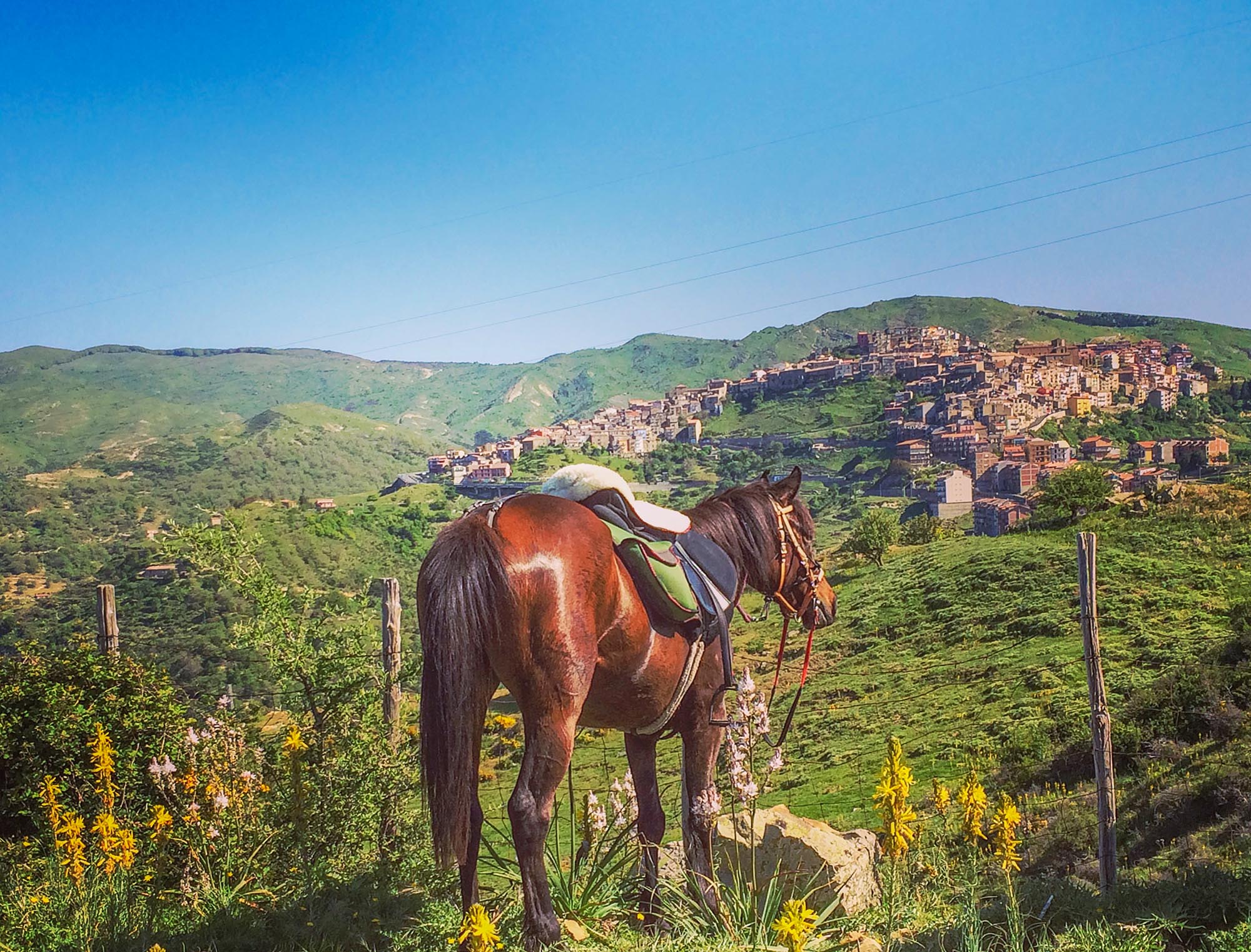 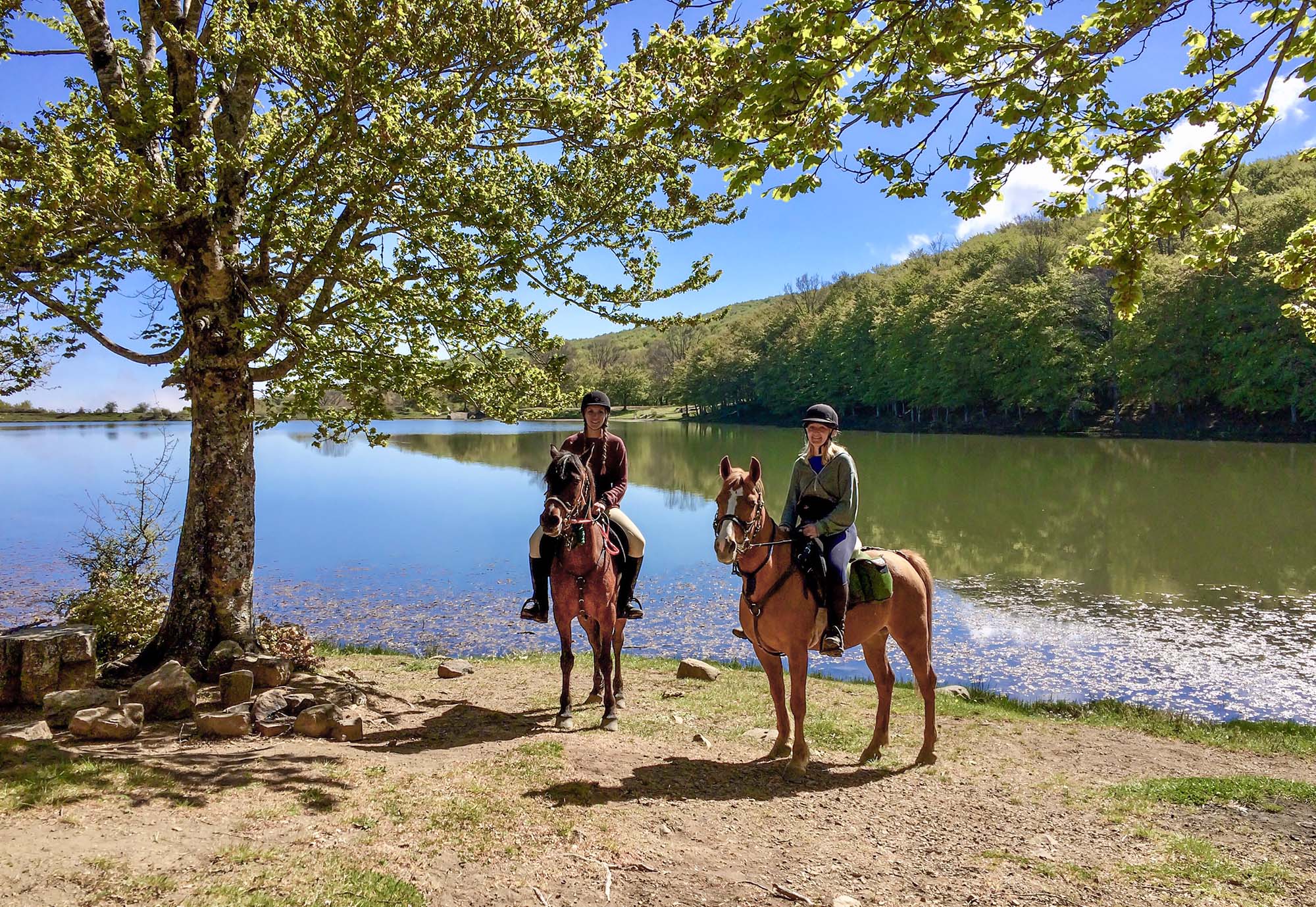 Day 1: Arrival Arrive at Catania airport and get transferred to Casalvecchio Geraci, an old farmstead dating from the 1800s, which has been restored and transformed into an agriturismo, immersed in deep Sicily, on the border between the Madonie Park and the island's agricultural hinterland.  You will enjoy a dinner prepared with local produce and spend the night here.
Day 2: Casalvecchio – San Mauro Castelverde After breakfast you will set off at around 8.30 in the morning and begin the trail by riding along the valley of the River Pollina, along ancient paths used to transport livestock dating from the Bourbon era, surrounded by fields of grain and hay. Enjoy a picnic lunch before climbing towards the village of San Mauro Castelverde, a medieval town perched at the top of a mountain at about 1100 meters above sea level.  Dinner and the night is spend in an old Franciscan convent, which has been transformed into a hotel. Total length: (Hours of riding: 7 - 30km)
Day 3: San Mauro Castelverde – Monte Soprano Setting off along old paths with beautiful views of the surrounding countryside, passing the border between the provinces of Palermo, Enna and Messina, reaching an altitude of approximately 1200 metres. Ride directly beneath the great windmills of a wind farm, before descending into the forests of the Sambughetti-Campanito reserve, where you will stop for a picnic lunch. Continue on to the territory of Nicosia, followed by Cerami, before arriving at the agriturismo Monte Soprano, a beautiful farmhouse with a swimming pool set on the slopes of the Nebrodi Mountains. Dinner and spend the night. Total length: (Hours of riding: 6 - 32km)
Day 4: Monte Soprano – Villa Miraglia Ride through the heart of the Nebrodi Natural Park, along the famous "Dorsale" (the Nebrodi Ridge), passing through forests and high mountain pastures.  Enjoy extraordinary views over the Tyrrhenian Sea and the Aeolian Islands to the north, and the island's hinterland to the south – Enna, Caltanissetta, Agrigento, Siracusa, Catania, and Etna towering above everything else. Enter the Nebrodi Natural Park through beech woods in the territory of San Fratello, famous for its sanfratellani horses, a native breed which you may catch a glimpse of grazing in the wild.  Stop for a picnic lunch in a shaded spot beneath centuries-old trees. In the afternoon, you will arrive at the Relais Villa Miraglia, where a delicious dinner made with local Nebrodi products awaits. Total length: (Hours of riding: 7 - 38km)
Day 5: Villa Miraglia – Monte Colla This is probably the most beautiful day of the trail, riding for more than 40 kilometres along the "Dorsale" through mountains, woods and lakes, in the midst of a strikingly beautiful landscape. Come to the Maulazzo Lake, dominated by Monte Soro, the highest peak in the Nebrodi mountain range (at 1847 metres) and covered in magnificent beech woods. Reach the famous lake Biviere di Cesarò, which is a resting place for migrating birds. Continue along the "Dorsale", with lush forests giving way to clearings with panoramic views over the Aeolian Islands and the majestic peak of Mount Etna. Arrive tired but satisfied at Monte Colla, the most isolated hotel on the island, housed in an eighteenth-century aristocratic home at around 1400 metres above sea level. Enjoy a delicious dinner prepared with local produce and spend the night. Total length: (Hours of riding: 8 - 42km)
Day 6: Monte Colla – Etna North Set off in the direction of the source of the Alcantara River, and continue on towards Randazzo, a typical Sicilian village between the Nebrodi and Etna Parks. Pass through Randazzo before ascending Etna's northern slopes, reaching Mount Spagnolo, and follow the Altomontana piste to the accommodation, the Chalet Clan dei Ragazzi, immersed in an enchanting pine forest. Dinner and spend the night. Total length: (Hours of riding: 7 - 36km)
Day 7: Etna North - Castiglione di Sicilia Set off at around 9.00 in the morning. Crossing lava flows from various older and more recent eruptions. Climb up through forests of pine, oak and chestnut and past volcanic caves, enjoying breathtaking views of the mountains of Sicily and Calabria. Reach the Rifugio di Timpa Rossa at an altitude of 1844 metres and stop for a picnic lunch. Depending on the season and the conditions, you may climb up to the craters from the last major eruption of 2002. After lunch, continue along small country lanes bordered by stone walls made from lava rock and paths crossing back and forth across the river before arriving at the Gorges of Castiglione and the Cuba Bizantina, a place of worship built in an unusual quadrangular shape, dating from around the seventh or eighth century AD. Arrive at Castiglione di Sicilia, where you will have dinner and spend the night. Total length: (Hours of riding: 7 - 35km)
Day 8: Departure After breakfast you will be transferred to Catania airport.

Departure on Day 8 between 11am and 4pm.

The full balance is due 56 days before start date.

Book with confidence – Covid Guarantee:
if ride operator is closed/you are unable to travel – due to lockdown:

1/ The deposit is reissued as a rebooking voucher to rebook anytime.
2/ Any balance payment will be refunded to you in full within 1 week of departure date.

You are booking with the riding holiday operator, these are their booking conditions:

1. All participants must have in place a valid insurance policy (travel or otherwise) that covers them for horse riding abroad. Details of this policy must be provided to the trail organiser prior to the date of travel.

“I am an experienced rider and able to mount & dismount unaided. I have a firm seat and I’m confident and in control at all paces over rough terrain (including rising trot, light seat canters and gallops) and have a good level of current riding fitness. I do not suffer from any illness or disability that could prejudice my safety or that of others.”